I bought the first four books of Finnian bound together in one volume.  The premise of the story is based on a real-life, but strange natural phenomenon – seven mountains which form an almost perfect straight line across the globe from just off the coast of Ireland through to Israel.  On every mountain, a monastery has been built and devoted to St Michael the Archangel.  Each monastery was built independently without the knowledge of the other six monasteries that make up the Line of St Michael.  Legend has it that this line represents the strike of the sword of Archangel Saint Michael where he defeated Satan and sent him to Hell. 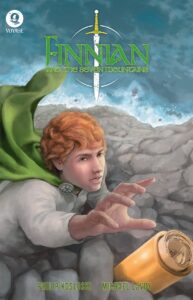 And so Finnian’s tale contains everything a lover of historical fantasy fiction could possibly want: ancient maps, a mystery to solve, a legendary sword to find, dark monasteries and abandoned castles, evil bandits, dragons and flying demons.  But it’s not all bad. Finnian also finds a small band of heroic friends and holy monks who help point the way forward. This series is a beautiful blend of Jungian archetypes, Tolstoy like quest and Hollywood blockbuster.  You’ll love it!

On Page one, a young, fresh faced Finnian embarks on a journey to seek out the legendary sword which has the power to defeat evil. His initial intentions are selfish ones: he wants to avenge the death of his family who were murdered by evil men. Within three pages, Finnian is plucked from the dangerous sea by a monk who becomes his right-hand man throughout his adventures. Archangel Michael makes a stunning appearance in the form of a vision, and half an ancient map is discovered. 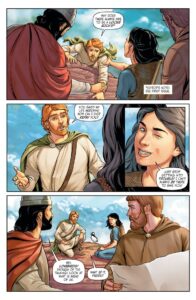 In Book 2 the feisty, bow and arrow sharpshooter, Merewyn, joins them.  With everything she has ever known destroyed, she decides to help Finnian on his quest.  The baddies do bad things and hassle the poor old monks.  And Finnian has begun to sprout a beard!

The first four books follow Finnian on his quest to piece together the different sections of St Michael’s sword; and his character develops along the way.  With each adventure Finnian grows in courage and wisdom. The old monk sacrifices his own life for our heroes and facing imminent death utters, “Father, into your hands I commend my spirit”.  Such a great moment in the story!  (The old monk appears later as a spirit guide, so don’t despair!).

As I read, I was engrossed in the developing story and characters.  Although there was nothing particularly surprising in the way events unfold, it is still a pleasure to read and appreciate the efforts put into producing this wonderful series. What totally grabbed me were the graphics.  Each panel is meticulously designed, with attention given to perspective, placement and facial expression. All of the conventions of comic books are present – sound effects such as SCREE, or KRACK are plastered across the panel in creative fonts, perspective is used to emphasize greatness or vulnerability, dynamic colour brings the action to life.  I believe that many youngsters will love reading this series. 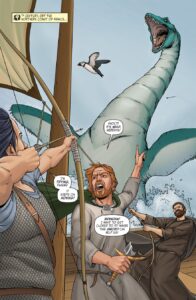 Each separate graphic novel within the volume is approximately 20 pages long.  The production of these graphic novels is stunning – from quality drawing and colouring to careful characterization and writing, these are extremely good examples of their genre.

Voyage is a relatively new venture founded by author, Philip Kosloski. He has gathered together a group of talented and experienced Catholic men who together create graphic novels that promote our faith.  In a recent interview these men – illustrators, colourists and writer – talked of how people will respond to the stories of our faith if they are not “banged over the head with the gospel”.  They intend to write and produce positive stories that real people can relate to. The mission statement on Voyage website is to

“…create exceptional entertainment, informed by Catholic values, that inspires people to live a heroic life. Through our products, we seek to advance the truth, beauty and goodness found in powerful stories.” 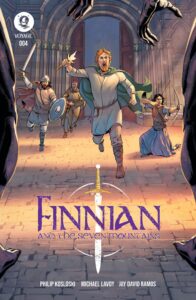 I would highly recommend this volume of four books, “Finnian”.  There are three more books in production at the time of writing.  These would be perfect for young teens, especially boys.  Actually, anyone would enjoy them simply because of their high quality and great story telling.  A warning that there is bloodshed, violence and scary creatures, so they may not be suitable for some younger readers.

You can purchase Finnian HERE.

Where do I begin?

The legend of St Michael’s Line would be a great place to start.

Write up your own short adventure story, and then make up your own graphic novel.  As a classroom activity this could be done in groups – sometimes students are painstaking with their drawings and art so this might end up being a term-long project.  Ask students to have their characters demonstrate virtues – courage, wisdom, loyalty and charity – have a discussion about these virtues.  (You might want to focus on the gifts of the Holy Spirit, or the Catholic Catechism’s seven virtues – four cardinal virtues of prudence, justice, temperance and fortitude and the three theological virtues of faith, hope and love).