From the first few lines of the first book in this amazing series, I was captivated:

“It was a brand-new Daimler, a twenty-horse-power, four-cylinder beauty, with a high bonnet, silver body-work and red leather upholstery.  It sent up clouds of reddish dust behind it, and the driver, peering short sightedly through his goggles and occasionally wiping the veldt from them, stabbed repeatedly at his horn.”

Mark Adderley has cleverly oriented us within the first paragraphs – we are back in the early 1900’s, out in the dessert and curiously wondering why a silver Daimler is careering towards our main character. These stories are written masterfully. As readers, we are plunged into another era where the threat of war is looming, and an adventure is unfolding before us.

I’ve read the first two books in the series and eagerly anticipate reading the rest.  McCracken is an old fashioned, very British (Scottish) adventurer who is well mannered, brave, level-headed and very Catholic. As an older reader, I recognized the characters immediately. Think Humphrey Bogart and The Saint meet Indiana Jones. Younger readers will enjoy getting to know McCracken and his collaborators.  And there are several other aspects to this series of books that readers of all ages will enjoy.

Mark Adderley is clearly a lover of all things engineering.  His books are brim full of explanations and descriptions about engines, flying aircraft, mechanical and electronic gadgets, steamboats and cutting-edge weaponry.  Our main character, McCracken is a world-renowned engineer. He sees beauty in the inventions of humanity.  He is captivated by the workings of machinery, and he is also an adventurer who doesn’t shy away from the occasional scrap with the enemy. Personally, I couldn’t really understand the explanations of machinery and engines.  The first book introduces their zeppelin which is carefully and lovingly described.  There is a sketch of the craft on the front cover of the book, but I couldn’t help thinking that a few drawings and sketches in the text would have aided my understanding.  A glossary of terms, particularly the German words used would have been helpful too. 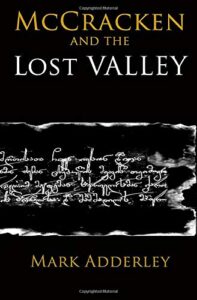 So, reading McCracken’s well written adventures and being immersed in an era of invention and discovery would probably have been enough for me.  But what makes these books so impressive is that there are deeper layers and meanings that can be discovered.  In the first two books, The Lost Island and The Lost Valley, McCracken and his team discover lost worlds that have been hidden away from the rest of us.  These worlds are idyllic and pristine – forgotten and untouched by ‘modern progress’.  This raises interesting questions for McCracken who thrives on ‘progress’ – on new inventions, ideas and discoveries. In both books, McCracken’s presence in the lost worlds results in their destruction.

Now there’s a dilemma to consider. McCracken wrestles with his conscience in The Lost Valley.  He finds a group of people living a peaceful, paradise-like existence.  But the war is coming, and soldiers are on his heels.  Sadly, he brings war, destruction and death into this paradise lost, but his knowledge of dam construction and the explosive force of bombs help save the Zunians.  And ultimately these peaceful, holy people throw down their weapons and rush to save the soldiers who are about to be washed away – one moment killing enemies, the next saving souls. 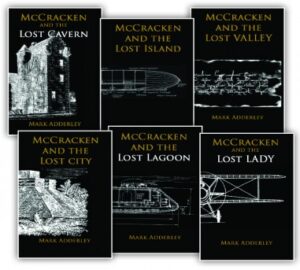 There is SOO much to think about and write about in these books.  And they are very Catholic.  At one stage, McCracken sails off from his adventure to find a Mass to attend on Sunday.  He takes his Catholic priest friend on one of his adventures.  He and his team communicate with the lost people by reciting the Lord’s Prayer.  He sits and prays a rosary while he waits for his rendezvous. There are multiple examples throughout of McCracken using his Catholic faith to inform his views and opinions. 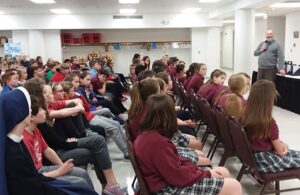 Unlike most teen books, there are no teens in the story, but the main characters are none the less likeable and heroic.  McCracken and his wife travel the length and breadth of Europe following clues, problem solving, discovering lost worlds and all the while watching the threat of war come closer and closer. The good guys win, the bad guys get their just desserts – these truly are brilliant books that I highly recommend.

You can purchase McCracken HERE