This beautifully produced book by Loyola Press is the second in the Harwood Mysteries, which is a three-part series. The book feels like an ancient artefact itself with echoes of a leather bound, ornately decorated tome from the past. Not only that, but it is a sturdy book, useful for school libraries or busy classrooms. 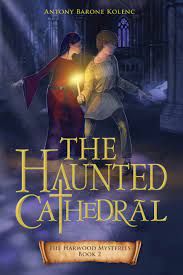 The story picks up with our hero Xan saying goodbye to his dear friend Lucy who is about to leave and travel England with her father. Xan feels depressed.  He’s lost his best friend and is out of sorts. To make matters worse, he has to accompany Brother Andrew who is taking their prisoner, Carlo, into the city to be tried.

The journey is long, and they have some adventures along the way. During the journey, Xan is given time to consider his feelings towards their prisoner, Carlo, who ordered the death and destruction of his family and the local village that Xan grew up in. He finds himself sitting face to face with the villain who ultimately caused his parents’ death.

Xan struggles with his feelings of anger and disdain.  The man himself, in chains, having become a shadow of the man he was, does not appear to be as bad as Xan would have him.  Xan is given the opportunity to reflect, consider the situation of Carlo and ponder what ‘forgiveness’ looks like. Brother Andrew intends to seek mercy on Carlo’s behalf, but Xan is still angry.  He wonders what his parents would want him to do.  Seek vengeance, or forgive? 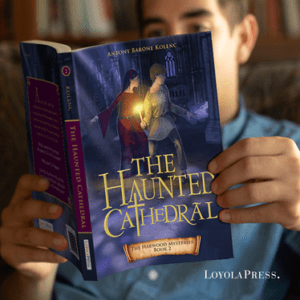 It is a struggle that remains with Xan throughout the book.  He bumps into Lucy and with a couple of other friends he makes in town, they become embroiled in the mystery of the haunted Cathedral. This is a Cathedral built atop an even more ancient Cathedral.  Tombs and crypts lie deep in the ground underneath.  Antony Barone Kolenc expertly evokes the eerie, dark and cavernous interior of an ancient Cathedral, lit only by daylight and a few candles. 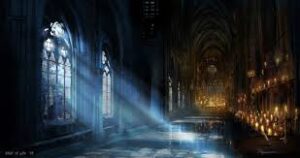 The story becomes more interesting and fast paced from this point on.  I wonder if there might have been more emphasis on the mystery of the Cathedral instead of the slower paced and longer first half that focusses on the relationship between Xan and Carlo. In any case, the mystery is solved in an exciting and climactic way.  Xan is a hero again.  Carlo dies before Xan extends forgiveness to him, but a small gift from Carlo results in a fortune being found and put to good use.

Xan finally feels able to forgive Carlo and experiences a great sense of peace and relief.  He is also freed from bondage from the Lord of the Manor, and he is truly able to consider his next step as a free person.  Contemplating his choices during the Easter feasting, Xan resolves to follow God’s will wherever it leads him.

A useful chapter is provided at the end of the book to advise young readers about the differences between contemporary times and life back in the 1100’s.  There is a short description of monks and monasteries, Feudalism, serfs and masters, male and female roles and the fact that people were considered adults at around age 12 – 14.  This provides a rich starting point for much research, further reading and discussion for young readers.

I recommend this series of books and urge you to include it in your school or homeschool reading list.  They are very Catholic and include interesting moral dilemmas that young readers will enjoy discussing. They are also a rich source of material for teaching about Britain in the 1100’s.

See my review of the first book in the Harwood Series HERE.