This is the second book in Corrina Turner’s confronting and exciting ‘I Am Margaret’ series. I read the first book some months ago, and you can read my review HERE. 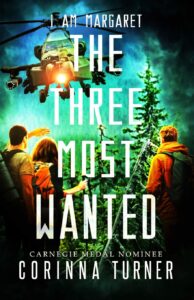 I was so shaken/enthralled/petrified by the first book in the series, that I needed a little time before tackling the second book.  In The Three Most Wanted, the story picks up with our three heroes making their escape having liberated all of the inmates at the dreaded Eurogov Facility.

Margaret is still healing – both body and mind – following her horrendous ordeal at the Eurogov Facility in which imperfect young adults are imprisoned in order to supply organs and body parts to ‘normal’ people on the outside. The three companions, Margaret, Bane and Jon are on the run.  The odds of them reaching a safe destination are not good.  They are heading for the Vatican State – one of the last free states left.  But will they make it? 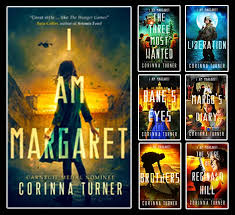 I have to say I enjoyed this second book despite my fears and trepidation. I always enjoy reading about how people battle against the elements and survive.  Corinna Turner is a wonderful storyteller, so we’re never quite sure who we can trust as our heroes journey on through dangerous forests full of wild beasts with little food or shelter. They have several encounters along the way – some good, some bad.  And then right when things couldn’t possibly get any worse and they are certainly doomed – well, you’re going to have to read the book to find out what happens.

Teens will love the continuing adventures of Margaret, Bane and Jon in this second book of the series. It is certainly a Catholic teen book – Margaret prays constantly and asks for the courage to follow God’s will for them.  In a desperate moment, she even utters the Prayer of Resignation to the Divine Will which I found really moving. By story’s end we have met the Pope and been inside the hallowed walls of the Vatican, only to find that here, too, the growing threat of the Eurogov is looming.

Corinna Turner has once again weaved into the story some theological dilemmas about whether killing is sometimes justified, whether one should promote violent opposition to a terrible injustice if it means others will die, where and when it is right to take a stand… She also makes a pertinent but powerful point about how evil can take a hold of us when it happens gradually, almost imperceptibly, over time. There is plenty for teens to discuss and think about in this book.  They’ll also love being disgusted about the bugs on the menu!

Discuss the Prayer of Resignation to Divine Will:

There are plenty of discussion/essay writing opportunities here:

Is it a sin to take a loved one’s life in order to save them from painful, slow torture and death?

When we know something immoral and bad is happening, are we obliged to try and stop it? (You might read the Catholic Catechism numbers 1905 – 1948 on the common good and solidarity).

What if the Eurogov threatened to torture your loved ones if you disobey?  What is the right thing to do then?

Would you eat bugs if you were starving?