Oh my goodness!  What a treasure this volume of short stories is. 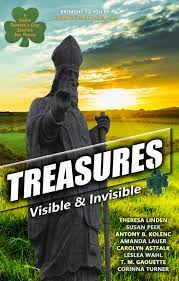 Treasures, Visible and Invisible is an anthology of short stories, held together beautifully by a shamrock shaped rock that is passed from story to story across time and space.  The stories begin with Saint Patrick in Ireland who discovers the shamrock shaped rock – fashioned, it seems, by God.  Inspired by the unusual shape and appearance of the rock, Saint Patrick realizes that the shamrock would be a useful and simple way to explain the Blessed Trinity to Irish folk. With exactly that thought in mind, young Saint Patrick hurls the rock into the trees and runs down to the beach to sail back home to Britain.

Thereafter, each story in the book features the discovery of this very same shamrock shaped rock.  Across hundreds of years, several continents and oceans the shamrock shaped rock finds its way into the hands of believers.  And in every story the rock is accompanied by miraculous occurrences. Each of these stories makes reference to Saint Patrick, and prayers are earnestly prayed by characters who desperately seek God’s love and mercy. Para 205 of the Catholic Catechism reads “I am the God beyond time and space…” and this book cleverly depicts that fact as God responds to the faithful who hold the shamrock rock and pray.

Following the story of Saint Patrick, Susan Peek writes beautifully and lyrically about a likeable young monk who lives several hundred years after Saint Patrick. In my humble opinion this is the standout story.  Peek expertly evokes an experience beyond time and place.  A small bird leads the young monk deep into the forest to a place unknown, where he finds the shamrock shaped rock and enters into a spiritual encounter with Saint Patrick. He emerges from the forest to find that three hundred years have passed.  With his dying breath he passes the rock to his fellow monks three hundred years hence. A-maz-ing!

This collection of short stories is so beautifully conceived and crafted I saw the inspiration of the Holy Spirit all over it.  There are too many highlights to list out here.  Travelling forward into more modern times, the very same rock eventually falls into the hands of William who lives in 19th Century Pennsylvania.   His younger brother, Patrick appears to be saved by the miraculous qualities of this shamrock shaped rock.  The mother of William and Patrick – a devout Catholic woman – quickly corrects William. Holding the rock she discerns, “This… and the many prayers and Communions you offered… delivered us a wee miracle, I think.”

The characters depicted in this volume are wide and varied.  I was quickly absorbed into the homeless world of Hannah and Pat in T.M. Gaoette’s story set in the year 2000.  From there, Corinna Turner completes the book by having her young hero attend Adoration and wonder what might grow forth now that the shamrock shaped rock has been planted beneath the soil. A fitting end to an amazing selection of stories.

This anthology of stories was so well done – thoughtful, beautifully written, carefully crafted and inspired. I smiled at Leslea Wahl’s ending to her story about Gangsters and Grace

“Wouldn’t it be incredible to know who else has been blessed because of that beautiful stone?

Well now you CAN imagine who else across time and location experienced God’s blessing when this sacramental from Saint Patrick’s hands is placed into the hands of believers. Just read this book!

Buy Treasures, Visible and Invisible.  Give it to your teens.  Buy it for your parish school.  Just get this book into the hands of teens.  Short story genre.  Absolutely love it.