This is Book Two in the Will Wilder series, and it is another thrilling adventure that will keep you reading and turning the pages.  I found the first book in the Will Wilder series to be so packed full of excitement that I had to put it down sometimes because my anxiety levels were peaking. This second book was – from my point of view – more enjoyable because it wasn’t so darned scary and creepy.  Don’t get me wrong – there are still plenty of moments of dark scary monsters and evil forces, but if felt like this story was ‘toned down’ a little from the first book.  Thank Goodness.

I particularly enjoyed the Biblical references to the staffs of Moses and Aaron. Using the well-known story of the ten plagues of Egypt, Raymond Arroyo has brought seemingly insurmountable problems to the little town of Perilous Falls.  The plagues are back! And it’s up to Will Wilder and his friends to save the town – again.

I was once again struck with how refreshing it is to read a book where the characters are all of different ages, backgrounds and abilities – adults and kids alike pull together to defeat this terrible, dark foe.  Throughout the book we meet characters who are Irish, British, downtown New Yorkers, New Orleanians, have disabilities and a vast array of super powers.  Raymond Arroyo also captures something of the silliness of adults from a kid’s point of view – younger readers will love it.

Raymond Arroyo writes extremely well – he drops clues and hints along the way as we try to figure out who the ‘bad guy’ is.  As the story progresses, we have a handful of possible suspects, and it isn’t until somewhere near the end of the book that we finally work out who is working for the dark side, and who isn’t. The final, brutal show down is everything you’d expect in a Will Wilder book – it’s scary, violent and keeps you sitting on the edge of your seat.  Will Will Wilder control himself and stay focussed as he meets the beast?  Is he brave enough?  Is he ready?  You’ll have to read the book to find out.

Themes in this book include the dangers of false prophets, worshiping false idols and of course valuing each other and sticking together.  Will has to overcome his own tendency to fire off at the mouth and lose his temper.  He has to learn humility and obedience – well, he still hasn’t mastered that one yet but there are still more books in the series!  Will’s own imperfections add interest to the story.  I was also intrigued by Will’s father Dan who is drawn as an insipid and weak character.  I keep thinking that Raymond Arroyo will redeem Dan somehow – perhaps in the next book?

Like the first book, this story explores the ideas of holy relics and good versus evil.  The spiritual realm is real in Will’s world, and a chosen few are continually fighting against these dark forces of evil. By book’s end we have learnt a little more about the main characters – including Will’s younger brother Leo who has discovered he can ignite into a bright glowing light – fascinating! 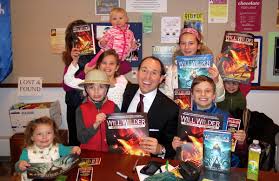 I highly recommend this second book in the Will Wilder series but be warned – if your child is sensitive or easily scared it’s probably best to give this series a miss.

Read my review of the first Will Wilder book HERE.

You can purchase Will Wilder and the Staff of Wonders HERE.

A GREAT interview with Raymond Arroyo by the inspirational children’s author LISA HENDEY where they discuss this book HERE.

I would use a Bible (a children’s version will do) and revisit the story of Moses and Aaron.  This second book in the series of Will Wilder will make so much more sense to children if they fully understand the power given by God to Moses and his staff.

Why not create a Graphic novel version of this story.  You might divide your class or kids into groups to create certain scenes in the book. Such a fun way to explore visual literacy – think colours, perspective, placement of characters (mis en scene) – what are you trying to convey with each panel?

1 thought on “Will Wilder and the Lost Staff of Wonders: Adventure novel for Catholic Kids”