It was only after reading this book for the second time that I truly appreciated how much is going on.  Raymond Arroyo is a master storyteller, and I was so wrapped up in the story the first time I read it, that I didn’t fully appreciate all of the themes, nuances and strengths of this book. Both times I read this book, I had to put it down towards the end because I was getting over excited.  Yes… it’s one of those books that keeps you turning pages and then wanting to flip ahead, and then putting it down so you can go for a little walk and catch your breath. 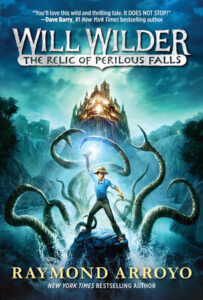 If you love fantasy as a genre then you’ll love this book.  There are demons and a secret society called the Brethren who each have a special gift that they must use in order to fight the ever-lasting fight against evil. And the latest leader of the Brethren is twelve-year-old Will who is just coming into his gift and his understanding that he is a chosen one. There are repulsive beasts, frightening beasts and black, gloopy beasts.  I loved it!

I don’t know that I would recommend this book for those under ten years old – it can be really scary and a li’l violent at times. I think parental guidance is recommended.  If your child is excitable or easily frightened, then don’t give them this book to read.  But for most 10 and up readers this book will be loved.  It is a long book with few illustrations so younger readers will need to be advanced to read it alone.  It is also a fabulous book for reading aloud (although it might be a bit scary for some children before bedtime). 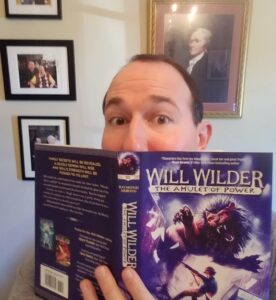 There are several aspects to this book that I love.  Firstly, it is extremely well written by an author who has obviously honed his craft.  Raymond Arroyo has been writing Catholic books for adults for a long time.  This is his first children’s book, which he developed from the stories he told his own children. He is an absolute Master of the Cliff-hanger ending to a chapter. I defy you to put this book down once you reach the halfway mark.  Arroyo seems to hit the climax at around about midway through the book – and it just keeps on going!  Here’s an interesting Facebook stream that Raymond Arroyo released where he talks about the Will Wilder series:

Catholic symbols and references to Catholic ritual, tradition and theology are used throughout the novel.  Scriptural references are also made, particularly about Saint Thomas and the prophet Elijah. There are moving statues, sacred books, miracle-working relics, booby trapped secret chambers and supernatural forces.  A major part of the story takes place in and around an old church perched on the side of a cliff. Arroyo stated in the above interview that the book is just as much for adults because there is so much more going on in the background to think about – he sure got that right!

Another part of this story that I loved was that it involves a whole, multi-generational family in the action. In fact, it involves a whole community of people.  There are so few children’s stories around that actually celebrate how people of different ages, abilities and capabilities can work together. Aunt Lucille is in her sixties and Bartimaeus is blind. But when everyone’s abilities are combined, the demons are defeated. Will is a little defiant and disobedient to start with, but by book’s end he has been suitably humbled and chooses to take a stand against evil in order to put things right again.

So far, there are three books in the Will Wilder series, and I have heard there are more to come!  If you or your children love adventure, fantasy, and getting really, really scared then get onto Amazon or Booktopia and buy these books!

Read my review of the second Will Wilder book HERE

There are a number of teaching possibilities within this book:

1 thought on “Will Wilder: The Relic of Perilous Falls”