I had a range of responses to this Christmas story of Hoshmakaka, the camel, who carries gifts to “a new baby king” in Bethlehem.  There are some really great elements to this picture book, but also a few things that I believe Catholic parents and teachers need to be aware of.  I’ll work through what I thought were the better aspects of the story and then discuss the problematic parts.  In the end, the decision is yours.

First written and illustrated in  1998, The Last Straw is an enjoyable tale of a somewhat grumpy old camel who probably needs a lesson in humility – and gets it. The story meanders along (probably like Hoshmakaka did), and we see more and more gifts piled high onto Hoshmakaka’s back as he follows the wise men through the dessert. Children will enjoy the repetitive way in which bakers, millers, and merchants stack their various gifts on top of the old camel until the pile becomes impossibly high.

Vlasta van Kampen’s illustrations are adorable.  Children will giggle and point at various gifts such as cookies, cakes, drums and bird cages as you turn the pages. There’s even a rolled-up carpet and a Romanesque column to be found amongst the treasures. The illustrations are a highlight of this picture book. They are fun and larger than life – a bit like Hoshmakaka.

When the tired, cranky old camel reaches his destination his legs give way.  One last gift – a piece of straw for the baby to lie on – is literally the straw that breaks the camel’s back. Which is just as well because Hoshmakaka wouldn’t fit into the stable where Jesus lay otherwise.  The pile of gifts on his back is so high that he can’t get in to see Jesus unless he kneels.  Following his lead, everyone else also kneels down, trying to be as reverent as possible.  The illustration clearly shows Mary, Joseph and baby Jesus with the wise men – and Hoshmakaka with all of his gifts jammed into the stable.

“Hosanna from Hoshmakaka” says the weary old camel, and with one touch from the baby, Hoshmakaka’s aching legs and back are healed.

So why do I have some reservations about this picture book, from a Catholic perspective?

For a start Jesus, Mary and Joseph are not named and there is no reference to Jesus being our saviour, messiah, or anything other than “a new baby king”.  This is not a picture book that will teach your children about the significance of Jesus as the son of God being born to a virgin in miraculous circumstances.  There are no Angels singing his praises.  Instead, the sands of the dessert seem to whisper their instructions to Hoshmakaka at various times throughout the story – cryptically, Hoshmakaka wonders whose voices whisper to him and make the sands shift like “creatures with great wings”.  I had a problem with that.  I can understand that Hoshmakaka may have a special connection to his environment being a camel and all, but the whispering sand shifting and speaking to Hoshmakaka made me feel uncomfortable in the context of this story. 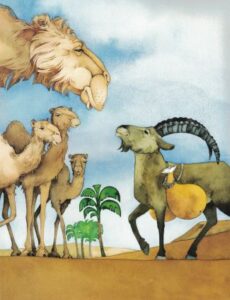 The story is wholesome and has a sound moral – Hoshmakaka was too proud and learnt his lesson. This would also have been a useful story if you wanted to teach your children about bringing all of your burdens to Jesus.  The trouble is, Jesus is not actually named.  There are some major changes and omissions made to this retelling of the Christmas story – the Christian elements have been removed.  A short review on the back cover of the book, I believe, brings the main problem to light:

“This low-keyed and gentle story can be enjoyed by a broad audience.”

In other words, this is a secularized version of the Christmas story that makes it suitable and acceptable for a mainstream school library.  As a Catholic parent or teacher, I would be concerned about that. No mention of Mary, Joseph, Jesus Christ or anything else that elevates our Saviour above “a new baby king”.  A bright star is followed across the desert, the Angels may (or may not) be present and no naming of Jesus or the Holy Family.

So, there you have it.  I acknowledge the good but urge caution from a Catholic perspective.