Father Mark Goring is a Catholic priest from Canada.  Well known on social media for his Catholic commentary, Father Goring has written several books. Here he has re-written the Ugly Duckling tale as You’re Not a Chicken. The premise is the same as the Ugly Duckling – an eagle’s egg is accidentally blown out of the nest during a storm and hatches in a chicken coup.  The baby Eagle grows up thinking he is a chicken – but he has an indescribable, deeply held desire to fly like the eagles.  The other chickens tell him not to be so silly – chickens can’t fly like the eagles! 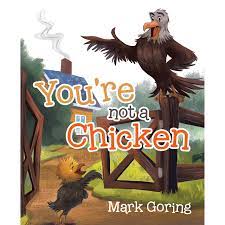 Along comes an older eagle who sits atop a fence post and tells the young eagle that he CAN fly, that he ISN’T a chicken, and he really ought to fly out of the coup. I loved this wise, kind old eagle who reminded me of a priest standing in the pulpit, telling the eaglet that he was destined for more than being a chicken, locked away in a coup.

Finally, the young eagle decides to ignore what the other chickens are saying, and he spreads his wings to fly.  Pretty soon, eaglet is flying up and away over the fence. 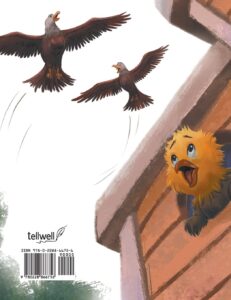 There are a few great aspects to this book and a few perplexing.  For a start, the book itself arrived in Australia within a day or two of ordering and had clearly been printed on demand by Amazon Australia.  That’s an excellent improvement on having to wait up to six weeks for a book to come from the U.S.  And the cost was significantly cheaper – another bonus!   The downside is that the quality of the book is compromised by this quicker process of production.  I’ve had a few story books that were printed on demand by Amazon, and they tend to have blank pages at the end.  This book had eight blank pages, which is a sizable amount when the story is only sixteen pages long. I suppose children could be encouraged to make notes and draw pictures at the end, but I feel like the print on demand process detracts from the overall quality of the book.

The illustrations are very good and of a high professional standard which is great to see in a cheaper book.  I suspect Father Goring has purchased a package form Tellwell publishing that includes professional illustrations.  It is really worth investing in quality illustrations – the characterization of the eaglet is very well done. Another critique I have is that the ending is somewhat abrupt – perhaps an editing or publishing problem.  In any case, it is a happy and uplifting ending that children will enjoy. I also want to make the point that there is nothing inherently “Catholic” in this story.  It is a story that promotes the virtues of courage and hope.  It is a great story to use with children who are feeling disheartened or stuck. I decided to review this story book because it is written and produced by a well-known Catholic priest.  I hope that Father Goring will share some ideas and insights about this little book on social media soon.