This book was written by Mother Mary Loyola one hundred and one years ago. In one sense, it is a book of its times – written between two devastating World Wars. Mother Mary Loyola wrote in a biography years later that many of the little boys she had previously taught had died in the first World War.  And so, she wrote this book in 1921, with the lingering odour of death, deprivation and destruction still heavy in the air.

Although originally written for girls, with the main character a girl, there was a French version found that was written for boys.  The edition I am reviewing was rewritten for boys in 2017 by Lisa Bergman.  The story is that the King of a distant Golden City comes to visit with a boy who lives on his own without a family it seems. Over time, the King’s visits continue as the boy learns life lessons, makes mistakes, and eventually learns how to love the King wholeheartedly.

The way the story is written is dated.  This is not a modern story that follows the conventions of modern storytelling.  There is no clear plot as such, and no growing suspense that culminates in a major challenge for the main character. Instead, a narrator provides short vignettes or stories in which the young boy learns his lessons about the nature of the love of God, the purpose of our lives, the sneakiness of the devil and other such things. To begin with, I had trouble orienting myself as a reader.  The language is of course, from an older era. For example, this sentence,

“Now it chanced that as the King was wandering one day in a dark wood in the land of exile, he came upon a young lad of eight or nine…Whether it was the King’s whim and nothing more, certain it is that he took an interest in the young lad.”

After a chapter or two, I had become accustomed to the language and found it easier to focus on the story itself. I have read that this book contains all of Mother Mary Loyola’s lessons from previous books.  Certainly, the lad is portrayed as a basically good boy who falters and fails to please the King at times.  But each time the lad fails, he learns a lesson from the King or his guardian angel, The Prince Guardian.

There are references to battles, soldiers and duty throughout the story.  Given the time period, it is not surprising that such references are present.  The boy’s confirmation is described in this way:

“And he knelt down before them all and placed his little joined hands within the hands of the King and promised to be a good soldier and faithful to him. And he was solemnly enrolled in the regular army and given a mark by which everyone would know that he was now a soldier. That mark would be a disgrace should he turn out to be a traitor to the King, but a sign of distinction and glory if he remained faithful to him and fought his battles bravely”.

Interestingly, the narrator makes a point of telling us that the happiest people in the world are those who live where there are laws to keep people safe from bad men who would otherwise rob and kill without punishment. Once again, this sentiment is pertinent given that this book was written when the world had just come through one war and would soon be embroiled in another catastrophic world war. The lesson is a good one, none the less, for the young of today. 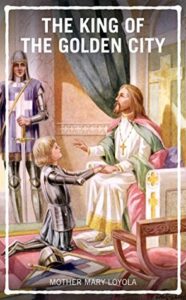 In these days of self-determination, identity politics and empowerment, it is challenging to read Mother Loyola write of “Self” who is actually the voice of the devil – always doubting, always rebellious and free spirited.  “Self” is personified as a separate entity who seems continuously to tempt the boy to do the wrong thing.  In today’s world, we certainly don’t speak of “Self” as that part of us that is weak, easily influenced, and prone to laziness and procrastination. Surprisingly, I found it refreshing to read about a personified “Self” who always seems to lead me astray!  I’m no psychologist but acknowledging that part of myself that isn’t perfect was a liberating experience.

The King is portrayed as loving and wise.  He always seems to understand the boy and treats him with patience and kindness. Ultimately, the boy is taken to the Golden City to be with the King.  The boy’s death is not the main point – it is his journey to the Golden City and the lessons he has learnt that are the focus of this story. 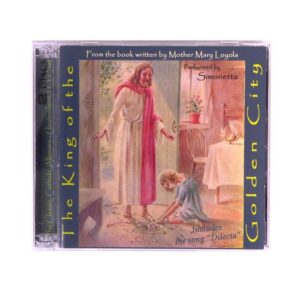 Is this the book for you and your children?  The choice is yours of course.  I have tried to convey how this book is dated, yet still valuable in many ways.  It is always good for children and young people to be exposed to a variety of literature and this is clearly an example of literature from one hundred years ago in very different times.  I like that the lessons that this boy learns involve self-denial, not giving into temptation, the value of disciplining oneself to undertake every day and mundane chores, the essential virtues of bravery and courage in our lives.  The battles that children and young people need to fight are not the same as a century ago – but there are certainly battles that children and young people are fighting for their own souls in our contemporary world.

That is a truth as real today as it was one hundred years ago.

There is an audio book version available HERE

You can purchase The King of the Golden City HERE