I wasn’t sure about reviewing this book because the author is not Catholic.  But I decided to include this one simply because it’s such a great book, and there isn’t anything specifically un-Catholic about it. The premise is that a brother and sister are staying with an eccentric old Uncle who is an archaeologist and has heaps of interesting artefacts lying around his house.  The children find some old scrolls and are transported back in time – way back in time.  In fact, they’re transported back to ‘before time’. 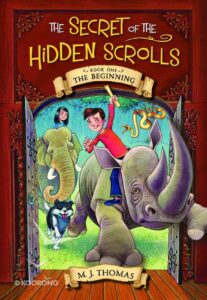 We follow the adventures of Peter and Mary as they witness and experience the first seven days of God’s creation.  It’s a fabulous way to reinforce the creation story.  From floating in nothingness, the children hear God’s voice command “LET THERE BE LIGHT” and light appears.  As the world and the universe come into being, the children have adventures and find help in the most unexpected places.  Archangel Michael appears to help them out, and some friendly dolphins and rhinos also make timely appearances.

I’m embarrassed to admit that by halfway through the story I couldn’t put it down – it’s a real page turner!  There’s a puzzle that the children need to solve to get back home which is a great way to drive the story forward and raise the stakes.  There’s also the evil snake himself that slithers into the story and tries to trick them.

The story is Biblically accurate as each of God’s commands come in the same order as in scripture.  The animals live harmoniously in the Garden of Eden, except for the snake of course, and Archangel Michael allows the children to watch from a distance as God creates the first man and woman. Children will absolutely adore this story – it has all the right elements to engage them and keep them reading.  The snake brings doubt and fear, but the children are too clever for him, and with Archangel Michael’s flaming sword and shield coming to their aid – the snake is soon slithering off ‘deep into the garden’.

Finally, and with time running out for the children, they solve the puzzle and return home to safety.  Phew!  All of the reviews I’ve read emphasize how much children have loved the story – so it’s a winner for parents and teachers. And it opens up a whole range of possibilities for teaching the creation story. One negative comment I read was that the children talk to the snake which might be considered as partaking of the occult.  Personally, I don’t have a problem with the children talking directly to the devil in the context of an imaginative story where they ultimately overcome him. There was a reference to the fact that Mary is Peter’s adoptive sister, and she is Chinese.  This means that the characters are of diverse heritage which will please many teachers and librarians who constantly search for cultural diversity in their story books. 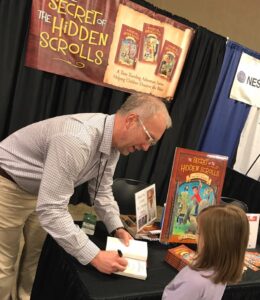 I can’t recommend the wholes series because I haven’t read it yet, but I can wholeheartedly recommend this first book of the series for you and your children.

You can purchase it HERE.

This would be a great book to help children develop their understanding of the creation story. I would read the original story from the Bible or from a children’s Bible to begin with.

From there, creative and artistic children could draw or  paint a picture representing each day of creation – which plants animals etc are added each day?

For a group or class project, children could create a Garden of Eden with their toys – animals, trees and bushes, fish.  Blue cloth could be the water, and green cloth could be the fields.  Collect some stones and twigs, bunches of flowers and foliage from your garden and add them to the Garden of Eden. You might also hang tennis balls and ping pong balls for the sun and moon.  Then let children play out the Creation Story and have them make majestic statements like “Let there be light!”.  You might also allow them to play out the story of Peter and Mary, complete with Archangel Michael and his flaming sword and shield.

For a writing exercise, older children could write a summary of the book, followed by answering some questions such as:

1 thought on “The Secret of the Hidden Scrolls. Book 1: The Beginning”