This is a story based on the true-life happenings of Henrietta Marie, daughter of King Henry IV of France, and her marriage to the Prince of Wales, Charles Stuart in the year 1625. 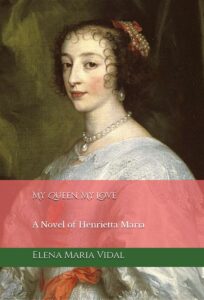 I recommend this story to mature teens who are good readers, probably more appealing to girls than boys.  There is adult content in the story, including reference to the young queen’s hesitation before her first sexual encounter with King Charles as his new bride.  There are no graphic scenes however. There is also discussion about the Queen’s menstrual cycle and her failure to conceive during the first years of marriage.

Predominantly though, this is a story of a fifteen-year-old girl who is thrust into an extraordinarily challenging role as Queen Of England.  She is a devout Catholic, and the English hate Catholics. They have just rid the country of all the Catholic religious and banned Catholic gatherings. So needless to say, Henrietta has her work cut out for her. 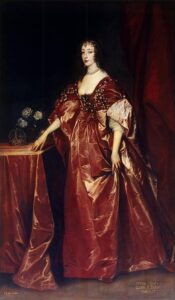 The story begins with an introduction to Henrietta Marie’s mother’s story – we are given a glimpse of the privileged life and rituals of French royalty.  Then the story moves forward in time and we learn about Henrietta Marie as a girl – she is indulged, protected, educated and indoctrinated into the Catholic faith.  Her marriage will, of course, be decided according to the political concerns of the day.  She is well aware that her marriage partner will be decided by others.  Ultimately, she is thrilled to be betrothed to the Prince of Wales in England and looks forward to her new life – pledging to be an obedient and good wife.

I enjoyed the description of Henrietta Marie’s entourage that accompanies her to England.  Three hundred people are sent with her – the boats that carry her possessions include horses, gowns, jewellery, servants, stable hands, ladies in waiting, chefs, and countless others. She even has dwarves who are enlisted to personally serve her.

Meanwhile in England, Charles is going broke.  Henrietta immediately notices that the castles look run down and in need of repair.  Furnishings are looking a little frayed. But none the less she enthusiastically meets her new husband and goes about her life – a large part of which appears to be dressing and bejewelling herself in various gowns with intricate accessories. Vidal spends a great deal of time describing the gowns, jewellery and decadent surroundings of Henrietta Marie.  Somehow this attention to detail brings the story alive. 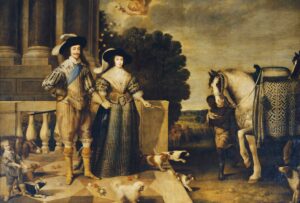 Unfortunately, and perhaps inevitably, the marriage has its ups and downs in those first few months and years. Charles seems to be under the spell of the highly influential and spoilt Buckingham, who was a favourite of Charles’  father.   I was infuriated with Charles’ inability to pull the rude rascal into line – Buckingham goads Henrietta, bullies her, humiliates her and flirts with her.  And she feels powerless to stop him because her husband appears to adore Buckingham and sees no wrong in him.

Eventually, Charles gets fed up with Henrietta’s French ways and orders all of her entourage home – a dramatic and fiery scene that made my blood boil. Surely, he was being nothing more than a tyrant – an overbearing bully! But cleverly, Vidal has King Charles 1st utter these words:

“You need to stop being a French princess, and start being a Queen of England!”

As the story continued, I began to see the truth in this statement.  Indeed, Henrietta Marie had not even tried to learn English – she had no need to because she was surrounded by her extensive French entourage who met her every need.  She continued in her French ways, instead of striving to adjust as Queen of the English, Scottish and Irish people.

Despite a broken heart caused by the loss of all of her friends and servants, Henrietta vows to obey her husband and endures Buckingham’s smug interference.  She holds fast to her Catholic ways and begins to build a small Catholic alliance of people whom Charles allows to celebrate Mass in a small chapel within one of his castles. Throughout their tribulations, Charles and Henrietta continue to love one another and enjoy each other’s company. Eventually the disastrous wars that Buckingham has encouraged Charles to pursue lead to the assassination of Buckingham.  Now that Buckingham is out of the way, Henrietta finds peace and her babies begin to be born – nine in all! 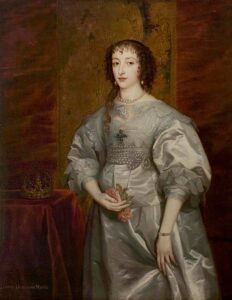 Although Charles continues to have major problems within his reign, at home with Henrietta and his children he finds happiness and fulfillment. He grows more tolerant of Henrietta’s Catholic ways and even attends Mass occasionally. The story ends with Henrietta discovering that her own mother arranged the assassination of Buckingham.  Although the ending is relatively abrupt, the saga is now set to continue into the next book of this trilogy.

Strengths in this book include excellent character development throughout and the pure enjoyment of reading about grand balls with glittering tiaras and silken gowns of every colour swishing about. Details of life such as the lacing up of gowns, how ladies pass the time of day, have their hair styled, what they eat and what rooms they move into at various times of the day are an absolute pleasure to read. 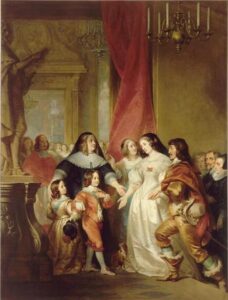 This story will appeal to those who love historical romance novels, especially anyone who is interested in this particular period of time.  Vidal includes a long list of references at the conclusion of the story for anyone who wants to research this historical period further. There is also an extensive list of characters at the front of the book.

So I recommend this book for older and more mature teens and young adults. It is a beautiful example of one young woman’s Catholic faith enduring through challenging times – and also a lesson in how patience and love can soften even the hardest (Royal) hearts to appreciate the truth and beauty of our Catholic faith.