Age Range: 9 – 14 depending on reading ability.

Paul McCusker is a seasoned writer having written for radio, plays and a movie.  He brings his experience to the well-known tale of Robin Hood in this enjoyable tween book that takes readers back to twelfth century England. There are many time travel books around, and this one builds on the familiar elements of the genre.  There’s an antique shop, a curious boy, some family mysteries, and there you have it – Andrew and his new young friend Eve Virtue are transported back in time. 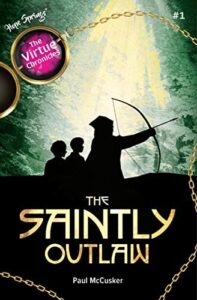 The story is soon set up as we discover that the corrupt baddies have taken advantage of the vulnerable and innocent.  McCusker expertly portrays a world where chivalry and honour battle against dastardly deeds and the poison of vengeance.  The action takes us from grand castles to humble cottages and back into the dark woods where Robin Hood hides and trains his men.

After reading this entertaining book, I wondered if it was distinctly Catholic.  After some reflection and rereading I decided YES, it is a very Catholic book, but the Catholic elements are not immediately obvious because the characters and story drive this book. The characters all pray. They make the sign of the cross, they ask for Mary’s grace.  A priest anoints the dying in the final pages of the book. 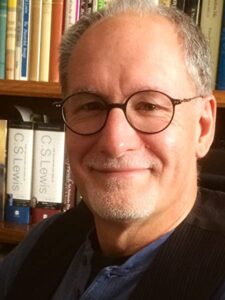 This is the first book in a series called “The Virtue Chronicles” and we see first hand how our young character, Andrew, develops and grows in virtue throughout the story.  He becomes more courageous and learns about righteousness and justice.  He is tested but ultimately speaks up for fairness and truth.  Just as he becomes more physically nimble and learns to jump from tree to tree in the forest, he also becomes more attuned to the difference between right and wrong. Eve, his friend provides guidance and demonstrates strength and courage also.

I like that the adults and children work together and complement each other in this story.  Too many books for children and teens portray adults as useless fools that need to be dispensed with so the story can continue. In this story of Robin Hood, the children learn from the good example of the adults around them.  They are given the opportunity to play their part and they are acknowledged for their brave contributions.

If you like historical fantasy, then you’ll love this book.  There is a magic charm that is central to the story and it is described as a scientific anomaly.  This fact may be problematic to some people who might consider it too occult.  There is also violence, injury and death portrayed, but I did not personally find it disturbing in the context of the story. 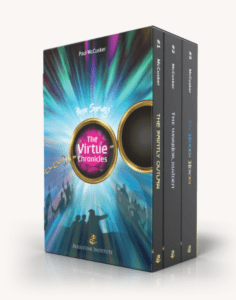 This book would be great as a class set for 12- or 13-year-olds. There has already been a second book in the series released, “The Warrior Maiden” in which Andrew and Eve travel through time to meet a young Joan of Arc. Update: the third book in the Virtue Chronicles has been released: The Hidden Heroes! 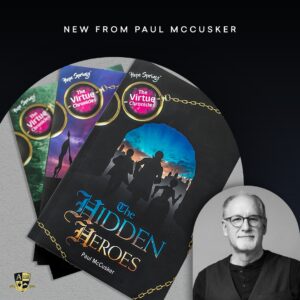 You can buy The Saintly Outlaw HERE

My first thoughts are to take your readers back to 12th Century England:

Use this wonderful resource from the British Library and download the pdf:

It has links to some great articles and pictures – if you follow the link to “the medieval diet” it describes how there were ‘courtesy books’ written which advised people not to scratch flea bites, pick your nose or fart at the table – kids will love it! It also includes links to women in medieval times or the role of peasants.  It really is a wonderful resource.

Building on from the idea of different portrayals of the legend of Robin Hood, you might ask students to discover as many different films made about Robin Hood that they can find – you might like to watch some of them together (include animated, and Kermit the Frog of course). Comparing and contrasting each representation would be an interesting exercise.

Ages 11 – 14 are such an interesting and vibrant age group to work with – I would be encouraging these youngsters to take control of their own learning and design their own activities so that they can pursue what interests them.  Some may undertake an artistic response to these Catholic stories, or they might write an essay, play or screenplay.  Some may create authentic sets or costumes or props, – I would just encourage and facilitate learning as it happens.

1 thought on “The Saintly Outlaw”